Your first time trip to Baltimore, Maryland and Quebec City, Canada. Provides detail itinerary for a week long trip and includes attractions, food and essentials for the trip.

This trip was also one of those combining work and vacation. I had a conference to attend in Quebec city, Canada and my friend from Baltimore, MD, was tagging along with me. Instead of each of us flying separately to Quebec, we decided that I fly into Baltimore and we rent a car and drive to Quebec City. Yes, it’s a long 11 to 12 hour drive but the benefits are:
1) You get to drive through a lot of the east coast including New York, Vermont, Delaware, Pennsylvania and New Jersey and enjoy the pretty drive surrounded by dense trees both sides of the road. Personally, I prefer to be on the road than fly.
2) Have the flexibility of taking stops of your choice as well as try out different food options on the way.
3) Can use the car to visit areas surrounding Quebec City. Renting a car in Canada can be expensive.
4) Depending upon your location, it may turn out cheaper than flying if you are sharing the cost of the rental and gas between 2 or more people.

The downsides of driving are:
1) You can get stuck in traffic and/or bad weather. My advice would be to leave early to avoid traffic delays.
2) You will  likely  pay for overnight parking in Quebec City.
3) I was surprised to find out how many toll roads one has to pass to drive through the east coast. To drive from Baltimore to Canada, it cost us about 35 USD one-way in tolls.

The Drive: Going into Quebec city, we drove through New York State while coming back we routed through Vermont. Both routes are pretty drives and we were fortunate enough to 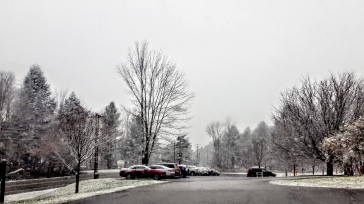 see spectacular fall colors which for someone living in Texas, was one of the prime attractions of the trip ☺. Unexpectedly, we also hit a mild snowstorm in south Vermont followed by heavy rain from there on, throughout the trip. This made the drive a little unpleasant but prettier with the snow slowly collecting on the trees and the roads, making it a beautiful and a romantic drive.

Quebec City: We spent 4 days in the city, staying in the famous and magnificent Fairmont le Chateau Frontenac. The hotel is one of the major attractions of the city with a lot of

other attractions built around it. The hotel stay is expensive, fortunately for us; my conference was in the hotel and hence was paid for. However, there are several other hotels in the area that maybe reasonably priced that will allow you to save some money while still explore the Fairmont, get a cocktail at the bar or grab a bite at one of the restaurants for breakfast, lunch or dinner. For brunch lovers, they have a very elaborate all-you-can-eat breakfast buffet every morning for 35 CAD. (http://www.fairmont.com/frontenac-quebec/dining/place-dufferin/). The hotel also has unique gift shops featuring products specific to the area such as art made of birch wood.

The city has a beautiful European look and the weather was cold and freezing, yet lively enough to be outside. It’s the first city I have encountered that provides an urban

experience as well as easy access to falls, rivers and a national park to be able to get a glimpse of nature, wilderness and some peace and quiet.

minutes from the city. The falls are located between the Montmorency river and the cliff and offers a mighty experience of the landscape with stunning panoramic views of the falls and the St. Lawrence River. In the Fall, the trees add several shades of color to the scenery making it absolutely worth strolling through the cold and misty weather. As stated on the website (http://www.sepaq.com/ct/pcm/?language_id=1), the falls can be discovered on foot, by cable car, or for the more active, a 300-meters double zipline, and the via ferrata, a hiking trail on a cliff, promising some adrenaline and breathtaking views.
As for us, we walked along the cliff through the suspension bridge, climbed down the panoramic stairs amidst the dense mist from the falls that leads to the gourmet restaurant where we had a nice hot chocolate to warm ourselves up. It’s a good idea to carry a rain jacket or a poncho incase you decide

to walk/hike as the mist will get you wet. We then walked back climbing the 487 steps from the bottom to the top of the park. It snakes its way up the side of the cliff, enabling you to see and hear the powerful falls. We spent about 3 hours at the park.

We then drove to the city and had lunch at Le Chic Shack that’s located just across the Fairmont hotel. This is where I had a best veggie burger I have ever eaten. Together with the classic French poutine, it was a perfect lunch for the cold, raining climate. The restaurant even makes in-house sodas, which are also interesting to try out. Our lunch was completely fulfilled with an Affogato made of vanilla ice cream and hot espresso.

Next, we walked along the Terrasse Dufferin located just below the Fairmont hotel offering spectacular views of the St. Lawrence River. Walking along the terrace, you will pass through the remnants of the fort under the glass. Despite cold, windy and cloudy weather, it was nice to walk along the river views on one side, and the hotel on the other.

We then walked back to check out the hotel wine and cheese bar for a cocktail and a warm and cozy hangout.

The same night, we had dinner at Sapristi Italian Restaurant located at the Quartier Du Petit Champlain, about 10 mins walk from the hotel. The food was delicious with lots of meat as well as vegetarian options. This was the impressive trend I noticed in most restaurants of the city.

On the second day, we had a huge breakfast at the Dufferin Place of the Fairmont hotel and

then drove to the nearby Jacques Cartier National Park located less than 30 minutes away from the city. It was snowing the entire time we were there but fortunately wasn’t accumulating it except at the mountain peaks. The park spans the Jacques Cartier River flanked by beautiful mountains offering a variety of activities such as scenic hikes, 8-km winter hiking, fat-biking, snowshoeing, fishing canoeing and many more (https://www.sepaq.com/pq/jac/index.dot?language_id=1). Starting with the picturesque

views of the river and the mountains just outside the visitor’s center, we hiked the easy Cascades trail, which allowed for a peaceful walk along the water stream followed by the Les Coulées trail of moderate difficulty. It offers about a 3 hour looped trail that takes you to the top with a 400m detour for a lookout and then climbing down to walk against the river, taking you back to the visitor’s center.

After spending about 4-5 hours at the park, we headed our way back to the city for a little snack at the Fudgerie at the Quartier du Champlain and then dinner at Le Lapin Saute. This restaurant is one of the most popular restaurants in the area serving some delicious rabbit leg and of course some really good vegetarian options like a vegetable polenta.

On the third day, we spent the day strolling around the Quartier Du Petit Champlain and nearby art galleries for some shopping. The art galleries in the city are unique and range from really pricey, big-sized wall art and sculptors to small, cute affordable art and prints made by local artists. In fact, I was able to buy a card for a friend from a gallery where I could meet the artist herself. Our lunch was at this food-court like place called Paillard that served a variety of options from sandwiches to pizzas to pastries to gelato.
In the evening, after attending the welcome reception for my conference, we had dinner at another Italian place; Bello Restaurante which also served several good-sized portions of savory and sweet options for vegetarians and meat-eaters.

The fourth day was mostly spent attending the conference while my friend relaxed at the hotel, although we did try out two restaurants: Chez Victor which had a Indian-French fusion menu but turned out to be my least favorite and at the hotel restaurant; Bistro Le Sam, where we tried some appetizers and desserts.

Attractions we missed: If time permits, I would suggest adding the Isle D’Orleans, Cathedral-Basilica of Notre-Dame de Québec and the Quebec-levis Ferry in your itinerary. The Island of Orleans is situated just across the Montmorency Falls and features a variety of shops and restaurants and an opportunity to pick your own fruits and vegetables, if season permits (http://tourisme.iledorleans.com/en/cats/what-to-do/) . In the evenings, after sunset, hop on the ferry-Levis for a short ride for gorgeous views of the Quebec skyline. It is open year round.

Note: Do not worry about language being an issue in Quebec City. Most people will know English as well as French at least in all of the touristy areas.

Baltimore: The Charm City as its called, Baltimore is a town full of historic buildings, the

beautiful harbor and two major universities: University of Maryland and The Johns Hopkins University. For tourists and even locals, you don’t really need cars to tour around the city as there are plenty of commute options including zip cars and the city circulator that takes you to major attractions in the downtown area absolutely free of cost. I spent two days in the city visiting friends and was able to walk through the Mt Vernon Area where the Washington Monument, the Peabody Institute are situated. Mt Vernon is located about 10 mins north of downtown and is filled with row houses and apartments of old historic elevations.

West of Mt Vernon is the Johns Hopkins Grad Campus and fortunately for me, because my friends worked at the University, I was able to get a sneak peak of the labs inside of it. The campus is mainly made of several university buildings; some old and historic and others new and modern.

I also visited the harbor and the Federal Hill Park during a nice sunny day. The park offers a peaceful stroll through it while grasping panoramic views of the inner harbor.
The inner harbor features several restaurants, shops, museums and other activities such

as taking a site-seeing cruise, exploring the historic treasures of the city or visiting the submarines or the world trade center, ultimately giving a cultural experience to the tourist. The Fort McHenry Park, which is the birthplace of the American National anthem may also be worth a visit and is a 10 minute circulator ride from Inner Harbor. Unfortunately I missed it as it closes at 5pm.
Nightlife in Baltimore can be experienced at the inner harbor or the Fells Point which is filled with restaurants and bars.

although one restaurant that’s worth mentioning is The Helmand, which serves Afghan Food. Its located in Mt. Vernon and offers a good mix of vegetarian and meat options. It was the first time I ever tried Afghan cuisine and I would describe it as a middle-eastern take on Indian Food.